DID SOME KIND OF TONGUES ACTUALLY COME OUT OF THE SKY AND SIT ON THE APOSTLE'S HEADS ON PENTECOST?

Home » News » Site News » DID SOME KIND OF TONGUES ACTUALLY COME OUT OF THE SKY AND SIT ON THE APOSTLE'S HEADS ON PENTECOST?

Printable Version
Email to a Friend
Subscribe: Email, RSS
DID SOME KIND OF TONGUES ACTUALLY COME OUT OF THE SKY AND SIT ON THE APOSTLE'S HEADS ON PENTECOST?

Better CLICK here quickly to find out what really happened.

Pentecost : "the Fiftieth [day]" is one of the prominent feasts in the Christian liturgical year commemorating the descent of the Holy Spirit upon the disciples of Christ after the Resurrection. Pentecost is celebrated seven weeks (50 days) after Easter Sunday, hence its name. Pentecost falls on the tenth day after Ascension Thursday.

Pentecost is historically and symbolically related to the Jewish harvest festival of Shavuot, which commemorates God giving the Ten Commandments at Mount Sinai fifty days after the Exodus. Among Christians, Pentecost commemorates the descent of the Holy Spirit upon the Apostles and other followers of Jesus as described in the New Testament Acts of the Apostles 2:1-31. For this reason, Pentecost is sometimes described as the "Birthday of the Church".

The Pentecostal movement of Christianity derives its name from this biblical event. The Descent of the Holy Spirit in the Rosary Garden of San Carlos Seminary, Guadalupe Viejo, Makati City, Philippines.

The biblical narrative of Pentecost is given in the second chapter of the Book of Acts. As recounted in Acts 2:1-6: And when the day of Pentecost was fully come, they were all with one accord in one place. And suddenly there came a sound from heaven as of a rushing mighty wind, and it filled all the house where they were sitting. And there appeared unto them cloven tongues like as of fire, and it sat upon each of them. And they were all filled with the Holy Ghost, and began to speak with other tongues, as the Spirit gave them utterance. And there were dwelling at Jerusalem Jews, devout men, out of every nation under heaven. Now when this was noised abroad, the multitude came together, and were confounded, because that every man heard them speak in his own language. While those on whom the Spirit had descended were speaking in tongues, the disciple Peter stood up with the eleven and proclaimed to the crowd that this event was the fulfillment of the prophecy ("I will pour out my spirit") in Joel 2:28-29. Acts 2:41 reports: "Then they that gladly received his word were baptized: and the same day there were added unto them about three thousand souls." 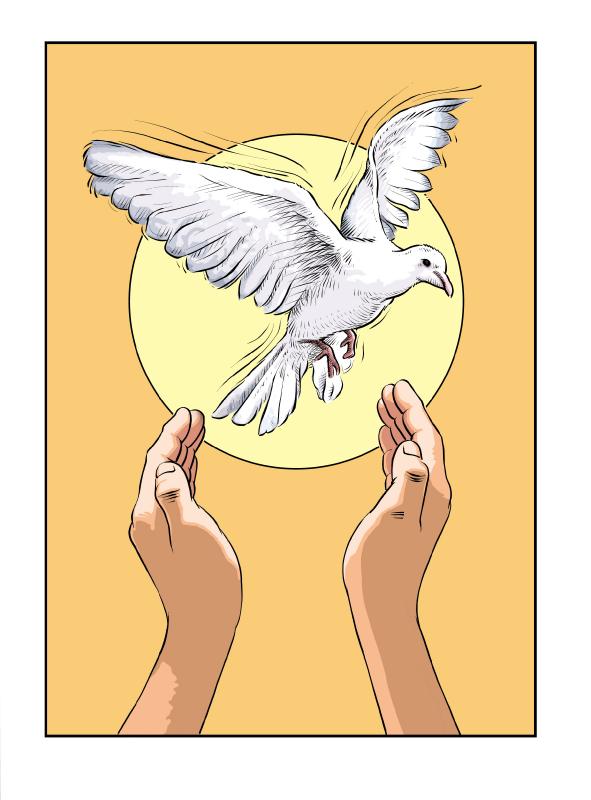 Discussion: DID SOME KIND OF TONGUES ACTUALLY COME OUT OF THE SKY AND SIT ON THE APOSTLE'S HEADS ON PENTECOST?
Flat ViewPost Message