HOW DOES RURAL LIFE RELATE TO GOD? CLICK TO LEARN

Printable Version
Email to a Friend
Subscribe: Email, RSS
HOW DOES RURAL LIFE RELATE TO GOD? CLICK TO LEARN 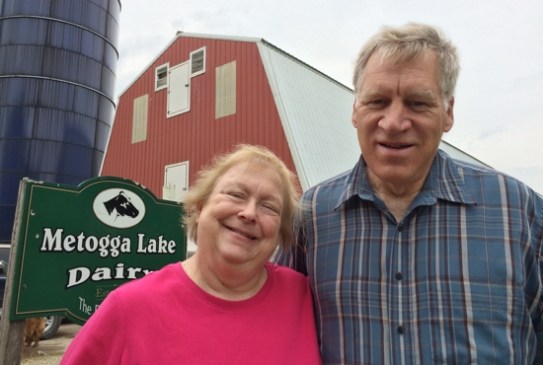 When Ray Pieper talks about creation, he illustrates a certain wonder, humility and vulnerability before it.

“How can a human being just happen?” mused Pieper, 65. “There are so many elements, how can they work together perfectly?”

He feels the same way about seeds sprouting, birds migrating and flowers blooming. Farming, he said, gives him an intimate perspective. “Creation is everywhere. God just takes care of it, some way, somehow,” he said.

Ray and his wife, Bridget, and six of their 10 adult children run Metogga Lake Dairy farm, located six miles west of Lonsdale and nine miles southeast of New Prague. Parishioners of Most Holy Trinity in nearby Veseli, the Piepers are hosts of this year’s Rural Life Sunday, sponsored by the Archdiocese of St. Paul and Minneapolis.

Seated at a long wooden table in their kitchen, the Piepers described the rhythm of daily life on a dairy farm. Milking begins shortly after 4 a.m. and lasts until 10 a.m. Late morning and early afternoon are for other chores: cleaning the barns, planting and harvesting crops, tending to machinery and repairs. At 4 p.m., the Piepers return to the barns for the evening milking, finishing around 9:30 p.m.

Ray grew up on a dairy farm near Jordan, but a dairy farm of their own was Bridget’s idea, he said. She grew up in Bloomington before moving to Jordan as a teenager and dreamed of owning a dairy farm. The couple purchased their farm shortly before they were married at Most Holy Trinity.

What started as a small operation now has 880 Holsteins; about 400 are milked daily. Their milk is trucked to a creamery and sold by St. Paul-based Land O’Lakes. They regularly win awards for low somatic cell counts, an indicator of quality milk and their cows’ good health. Last year, their cows produced about 1.23 million gallons of milk.

Both Ray and Bridget are semi-retired; their children share the responsibility for most of the farm’s daily operations. All of their children — who range in age from 40 to 19 — are farmers or are studying agriculture-related fields.

Did they encourage their kids to farm?

“We didn’t discourage them, but we don’t know what we did that they all want to be involved in farming somehow,” said Bridget, 62.

“The only thing mom encouraged us was to be a priest, and she didn’t get any of us,” quipped Nick, 29, who had joined his parents at the long table with a mid-morning sandwich and tall glass of milk.  Bridget laughed. “That’s not true,” she said. “I just encouraged them to practice their Catholic faith.”

Rural Life Sunday has been celebrated annually in the archdiocese for more than five decades, and is designed to bring people together for prayer and to celebrate the blessings of the rural life and special culture of rural Catholics, said Dale Hennen, a member of the archdiocese’s parish services team.

“Farming . . . is an important aspect of our society because of the food that’s produced in providing food security for people,” he said, “but also providing the utilization and protection of our natural resources so that the land can continue to be fertile and produce.”

This year’s Rural Life Sunday Mass will be followed by food, music, kids’ games and visits to the cows.

Father John Lapensky, pastor of Most Holy Trinity, said a host of volunteers with leadership from the parish council, altar society and men’s club have been key to organizing the upcoming Rural Life Sunday. He said he hopes visitors get “a sense of God’s blessings that come through rural life.”

“Farmers feed the world, and farmers work hard and are inadequately rewarded for the hard work they do,” he said. The event “gives a chance to show the life of a farm, at least a little.”

From the time between planting and harvest, Mass at Most Holy Trinity includes an annual prayer for farmers’ success, Father Lapensky said.

“There’s a very deep faith life out here,” he said. “The people I know who farm, and the people in the community around us who don’t, all share in that. I think you have to have faith to be a farmer. Farming involves a certain amount of gamble.”

The Church has long honored relationship between creation and the farmer, one that received new emphasis with the release of Pope Francis’ encyclical on ecology.

For Ray, that connection between faith and farming has been expressed in raising his children well. He sees farming as a way to model responsibility, cooperation and hard work. Watching his adult children work together gives him deep satisfaction.

“The biggest responsibility a parent has is to prepare their children for everlasting happiness,” he said. “The farm kind of helps us do that.”

In the Piepers’ kitchen, a portrait of St. Therese of Lisieux hangs next to prints of Holsteins and farm-related awards. Bridget insisted on decorating with devotional and farm art, she said — that, and naming their kids after saints.

As Catholics, the Piepers approach their work with prayer, especially when it comes to the weather. “You depend on good crops and everything, and God is there looking down, and you pray that you get good crops,” Bridget said. “Not that you always get good crops.”